With extra time on my hands, and a box full of open source COTS sensors and displays, I figured it might be fun to play around with a submission to the UNDP "COVID-19 Detect & Protect Challenge" I guess this counts as Article 02 in a series of posts on household inventions!

This is very early days, and this post will continue to evolve as I work on this project. Right now, there are quite a few challenges ahead, not least of which is getting the missing components that I need for my idea. Unfortunately Arduino's aren't considered essential deliveries on Amazon, so there is a long lead time to build with parts I don't already have on hand.

From the official website: "The UNDP is calling on Hackster's global community to support developing countries through the sharing and transfer of open source technology. This challenge has three priority actions:

I'm a scientist; because I invent, transform, create, and destroy for a living, and when I don't like something about the world, I change it.

Based on what I've learned from working with the UNDP for a few years now on various projects, the key to my submission is likely going to be around building a low-cost IoT network for developing areas of the world that have low or no traditionally connectivity. My prototype will be two parts:

While it's difficult to claim that any commercial off-the-shelf sensors will be sensitive enough to be medically accurate. However, I imagine that the real benefit of this platform is by leveraging large data sets over an Edge IoT network, looking specifically for group fever spikes. With a virus like COVID-19, it seems that the 'community' average temperature is actually more important than any single temperature reading.

I'm putting a great emphasis on designing something that I believe would be implementable in any developing community, using relatively simple to find off-the-shelf parts and 3D printed shells, and also not rely on 3G/4G/WiFi to push the data to the cloud. By using LoRA as the communication framework, which has a 2-3km range in urban environments and 5-6km range in rural settings, each community can collect and store group data for a geographic zone. Additionally, these developing communities are often those who do not have ready access to a single hospital or clinic where this type of community spread data would be collected.

Right now the project is coming along, built around the Adafruit Feather 32u4 RFM96 LoRa Radio - 433MHz module powered by a 4400 mAH LiPo battery. Still using the AMG8833 8x8 IR Thermal Camera as a sort of 'display', I've managed to enable a 64x64 interpolation working, giving me significantly higher resolution. However, because the sensor is only accurate to +/- 2.5° C, I'm going to rely on the GY-906 MLX90614 Non-contact Infrared IR Temperature Sensor as a primary temperature variable tool as it offers a +/- .5° C accuracy - good enough! 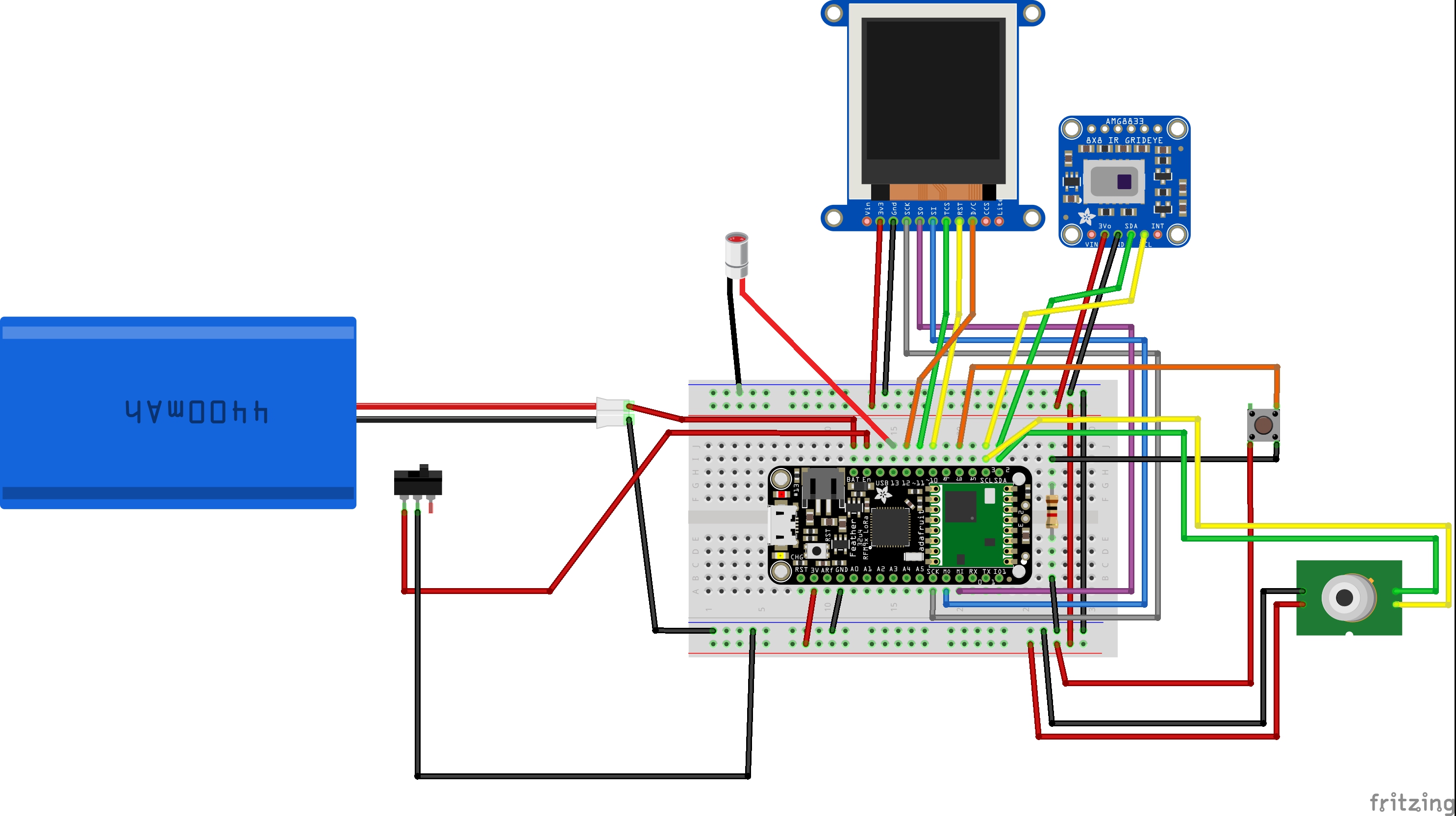 The display is a Adafruit 1.44" Color TFT LCD Display with MicroSD Card breakout (ST7735R), and there is also a laser diode for knowing where you're pointing the thing! 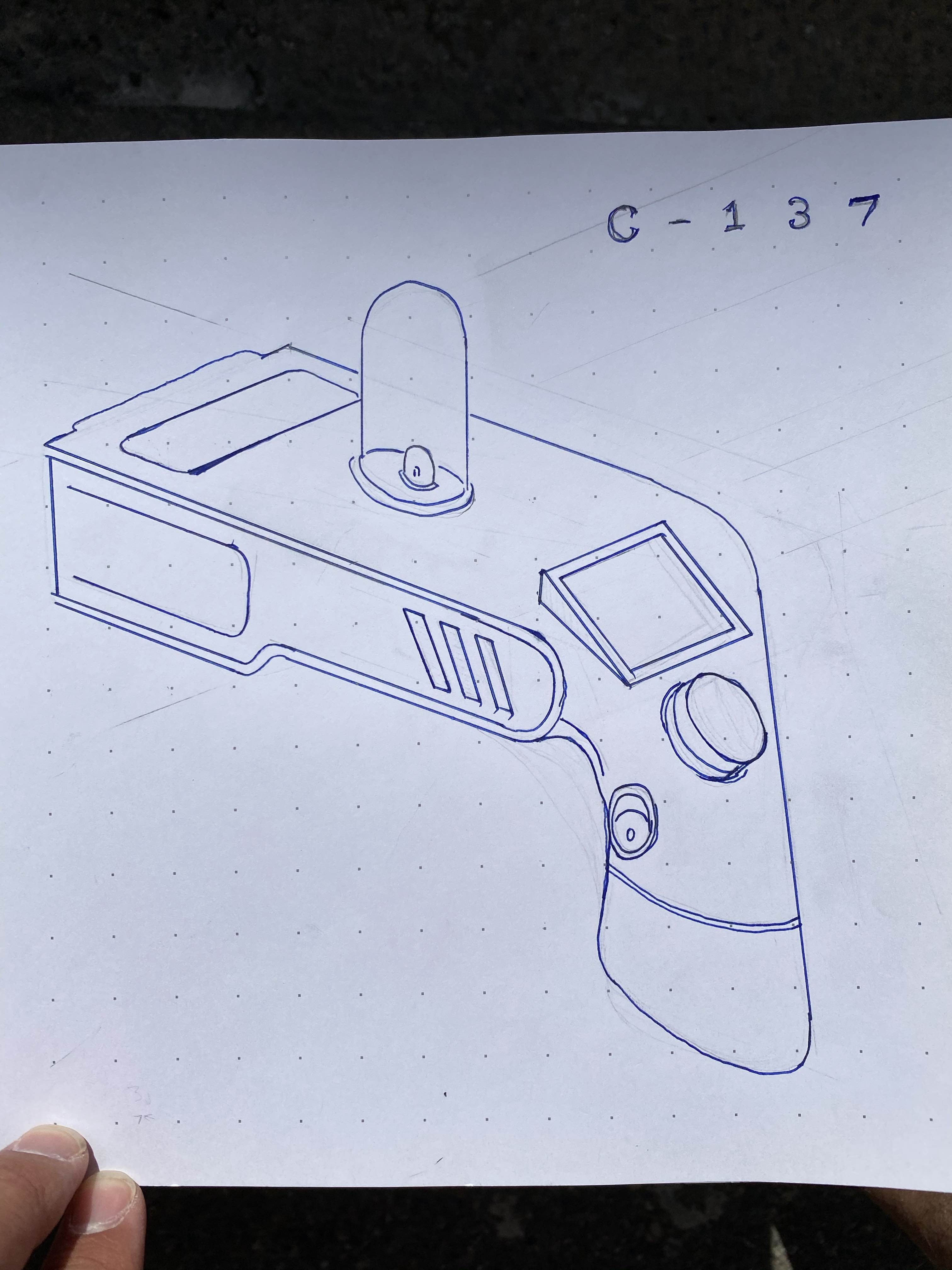 The big change since last post was that I've decided to put the project into a rather, ahem, interesting shell. I think it would be pretty fun to have a world-changing, life-saving, IoT enabled LoRA smart contactless thermometer inside of a Rick & Morty Portal Gun. Seriously - I think this would be both helarious and awesome.